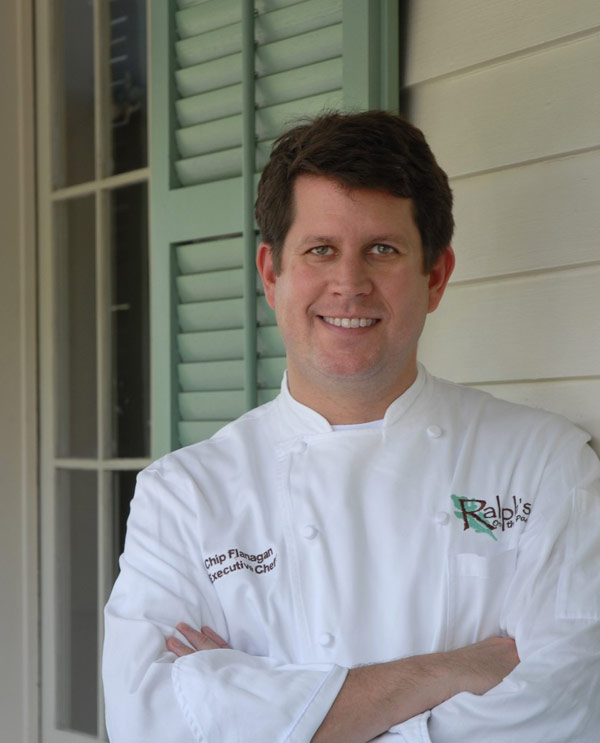 If you've ever seen Chip Flanagan performing a cooking demonstration, you know how comfortable he is with public speaking - especially when things could go horribly wrong or are a piece of cake. The executive chef of Ralph's on the Park not only keeps his cool, but he keeps his audience entertained. It may have something to do with his BFA degree from New York University...

Flanagan is from New Orleans, with the native interest in food that is his birthright. His paternal grandmother was a classic cooking matriarch, and his father was the weekend 'special meals' cook. When Flanagan was up at NYU, he'd call his dad to talk him through making red beans and rice in his dormitory kitchen. Because it was too far to travel home most holidays, he's roast turkeys there, too. "I didn't know what a professional kitchen was, so I thought I was doing fine!" he laughs. On weekends, he worked as a busboy in a local tavern, and slowly 'wandered' in to the kitchen. "When I graduated and returned home to New Orleans, I thought, 'Let's give this cooking thing a try.'"

He began at the famed Alex Patout's. When he enrolled in the culinary program at Delgado Community College, he took a job at Chez Daniel, where working with the highly regarded chef, Daniel Bonnot. Bonnot became his mentor [he was Susan Spicer's, as well,] teaching Flanagan the ins-and-outs of organization, kitchen sensibility, how to handle food, and old-fashioned hard work and repetition. "The great thing about chef Daniel is that he did not fit the stereotype of a French Chef who thumbs their noses at American chefs - he taught me that whatever I cooked, it had to be done right, whether it was Beef Wellington or a Grilled Cheese. That spirit really helped when I was in hotel work," Flanagan reflects. He worked with Bonnot for eight years, during which he was given the opportunity to travel and work at festival events in places like Juan le Pins in the south of France, and cities throughout Brazil. He provided Chip with a wealth of worldly knowledge and influential cultures that play a strong roll in his cooking today.

Flanagan's next step was to a run a small, well-established restaurant on the island of St. Croix, which featured American-Danish-Creole cuisine. As executive chef, it was a steep learning curve, and not without its challenges, but the seafood, naturally, was great: "I made a mean Spiny Lobster Gumbo..." he recalls.

Returning to the mainland after a year, he headed to the renowned Louis XVI restaurant at the St. Louis Hotel. It was three more years of French cuisine, this time with chef Agnes Bellet, from whom he learned a great deal about the elements of refined tastes on the palate. And then, it was the year of Hurricane Katrina, which changed so much for so many in New Orleans, "Yes, and it changed me," says Chip. Returning to New Orleans and Louis XVI after the storm, he began looking for other opportunities, and was offered [among others] the position of sous chef at Ralph Brennan's Ralph's on the Park.

"I dropped right into the deep end," he laughs - "if you can survive December at this restaurant, you can survive anything." The elegant dining rooms and balconies overlooking City Park host six parties a day during the holidays. Flanagan has a hearty appreciation for the beautiful professional kitchen facilities that make it all possible. "Our young cooks are so spoiled, thinking this is normal: on St. Croix, our ventilation consisted of a hole in the roof over the stove."

Flanagan is known for his dedication to farmers markets, local purveyors, and local products, to which he applies not-necessarily-local preparations. He is spurred on by Ralph Brennan, who urges his chef to keep it creative, and continuously inspire yourself as well as the diners. This effort is lauded by former local food writer Brett Anderson, who describes Flanagan as "high risk, high reward" and "the most creative chef working in a Brennan restaurant...." Flanagan triumphed in the United Way 2009 Gumbo Cook-Off, and was honored as one of the American Culinary Federation's top 25 Chefs in Louisiana in 2011. He was also recognized as "A Top Pick" (sandwiched between Emeril Lagasse and John Besh) for "New Orleans' Best Chef" in the 2010 Times Picayune Readers' Poll and as a 2010 Culinary Connoisseur "Best Executive Chef" by New Orleans CityBusiness. Flanagan is careful to keep up with the latest techniques, and his ongoing education includes a sous vide intensive at the French Culinary Institute in NYC. In 2012, Flanagan was tapped by the U.S. State Department to participate in its Diplomatic Culinary Initiative Partnership with the James Beard Foundation in hopes to cultivate cultural understanding, elevate formal diplomacy, and strengthen bilateral relationships through the shared experience of food.

"Never stand still, I say," smiles Flanagan, "Keep moving, keep changing and growing. You'll have a few misses, but a lot more hits, if you know what you're doing. Above all, you've got to keep your sense of humor." Case in point: Flanagan's TCB Foie Gras, his tribute to Elvis, featuring seared foie gras on a fried peanut butter and banana sandwich. The predominantly local clientele of Ralph's on the Park, which is not in the Quarter, clearly appreciates the variety and creativity. Even the few New Orleans classics that anchor the menu are familiar, but still exciting. His Crabmeat Ravigote gets piled high in a flaky napoleon. For his Turtle Soup and Barbeque Shrimp, Flanagan changes the plate with the seasons, adding roasted wild mushrooms in the fall, for example.

When the cool weather comes on, Flanagan gets to indulge in his favorite cooking technique, braising. "I think it draws out enormous flavor and richness, and delivers a home-cooked comfort like nothing else. An ingredient like lamb cheeks might turn up on the menu as Lamb Cheeks braised in Guinness with a Bouquetière of Root Vegetables one day, or as Lamb Cheeks braised in Middle Eastern Spices with Cous Cous, the next.

In response to another of Ralph Brennan's directives, Flanagan keeps a healthy fish dish on his menu at all times. At the moment, there's his take on a Salade Niçoise, as well as a nice light offering on his "Visiting Fish" menu column: a Miso-Cane Sugar Glazed Copper River Salmon with Steamed Shrimp Dumpling in Shrimp Broth served with steamed vegetables. He appreciates this constant challenge of not relying too heavily on fats to enhance flavor. It's another instance of not standing still.