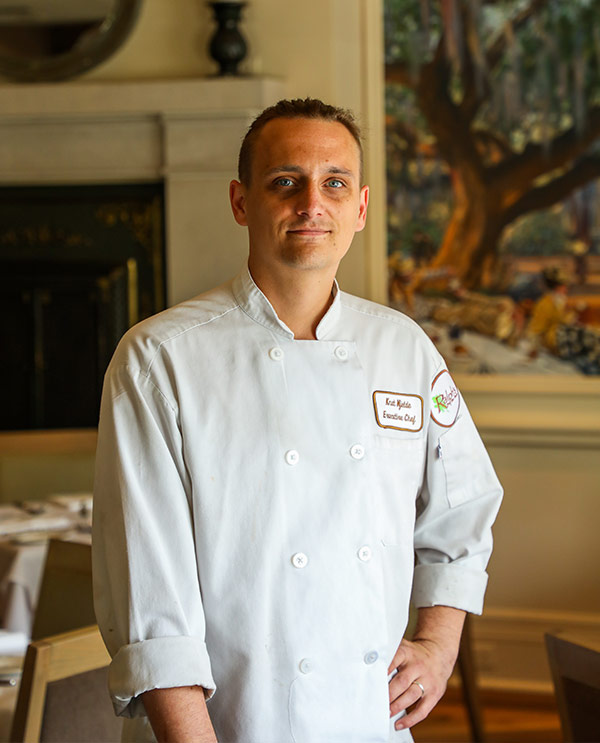 If there's one aroma that leaves chef Knut Mjelde weak in the knees, it's chicken stock. That's because some of the best meals of his childhood were made by his grandmother, who had deep Southern roots. "To this day, even just a whiff of chicken stock can bring on my nostalgia for her chicken noodle soup, and by extension, all her good home-cooking..." he says. It's a handy memory to be channeling, as Executive Chef at Ralph's on the Park.

Mjelde got his start at September's Restaurant in Hendersonville, Tennessee, when he walked in and begged the chef for a job – doing anything. "I was the kitchen kid: sweeping floors, folding towels. Eventually, the cooks, who were really good and of all different backgrounds, taught me the fundamentals." By the time he had earned the rank of sous chef, one of his colleagues who was then his girlfriend (now his wife,) was getting homesick for New Orleans. Moving there and finding work at the acclaimed Stella, he says, "was like being Charlie in the Chocolate Factory. It made me so happy just to walk into the kitchen; I couldn't believe what was going on around me!" Beginning again at the bottom of the kitchen hierarchy, he worked his way back up to sous chef in the rarified environment, creating 'edible artwork.'

Now, at Ralph's on the Park, Mjelde's says, "Our dishes pay homage to traditional favorites, but as contemporary incarnations not found anywhere else," he explains. The team's Redfish Amandine, for example, features butter made from almonds, and lemon gelée, as separate elements on the plate. "The flavors are concentrated, and the deconstruction allows for a highly personal experience as guests compose each bite. It becomes something completely unique," he says.

In this highly creative kitchen, sharing opportunities and expertise with new cooks is the role Mjelde values most: "Everything I've achieved is thanks to the kindness of strangers who've believed in me. My goal is to do the same for others."